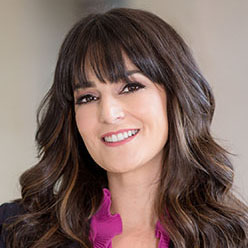 Melissa Tapanes Llahues has made her mark not only in the legal profession but also in the greater Miami community.  She became a named partner at Bercow Radell Fernandez Larkin and Tapanes, PLLC in 2020.

Highly committed to her community, Melissa was newly appointed and sworn in as a member of the Miami Downtown Development Authority Board of Directors.  She served on the City of Miami’s Miami 21 Report Ad Hoc Task Force where she was elected Chairperson by her peers to lead in the review of the Miami 21 Zoning Code. She is the immediate past Chair of the Florida International University President’s Council, a trustee of the Builders Association of South Florida, and served on the Board of Directors of the Latin Builders Association for over a decade. She is involved with numerous legal and civic organizations, including Commercial Real Estate Women (CREW), Florida Association of Women Lawyers (FAWL) and the Cuban American Bar Association (CABA). In 2017, the South Florida Business Journal recognized her professional accomplishments and community leadership with its coveted 2017 “40 Under 40” Award. In 2021, she was recognized as one of Ford Motor Company’s Mujeres Legendarias representing Ford’s pillar of leadership.

The Legal 500 has named her a “Recommended Attorney” every year since 2017 and is ranked in Chambers USA 2021. She has been named a “Rising Star” by Super Lawyers® and an “Up and Comer” by Florida Trend’s Legal Elite, and selected for inclusion in numerous Who’s Who publications.

Her activism has been long in the making. In 1999, Melissa was appointed to the State of Florida Board of Education Postsecondary Education Planning Commission (PEPC) by Governor Jeb Bush, where she recommended legislation, funding, and policy initiatives to the Governor, Legislature, and Board of Education for both public and private higher education institutions. While still an undergraduate, Melissa spearheaded the student initiative for the approval and funding of a public law school as a lobbyist for Florida International University’s Student Government Association.