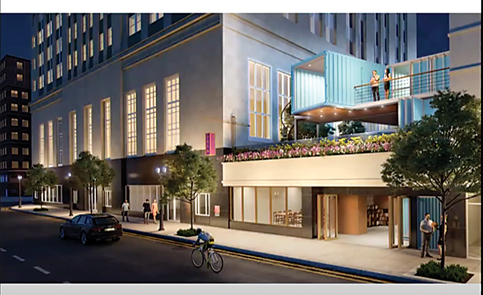 One of downtown’s most historic staples, the Alfred I. duPont Building, could soon be home to a microbrewery and brewpub that would boast a cantilevered shipping container.

The City of Miami’s virtual Planning, Zoning and Appeals Board heard plans last week for the 11,000-square-foot brew hub that would also feature an outdoor beer garden built atop the abutting annex.

The board recommended approval of exceptions allowing an alcohol service establishment larger than 5,000 square feet in the Flagler Specialty District and the expansion of the structure and a warrant to allow outdoor dining on the second-floor roof terrace. The items will now go to the city commission for approval.

The business would straddle both the duPont Building and the abutting one-story annex building, facing Northeast Second Avenue. The first floor would consist of the kitchen, the brewpub and the mill room, where the beer would be produced.

Above the annex building would be a roof terrace, referred to as the beer garden. The third floor would feature the cantilevered container, serving as a multipurposed room.

Attorney Melissa Tapanes Llahues, representing the applicant, said the goal was to bring the Florida National Beer & Trust Co. to the building. She said that while discussions are still ongoing with the city and county for the cantilevered container, Eileen Higgins, the district county commissioner, has submitted a letter of support.

“We’re hoping it will be cantilevered a bit for architectural interest” Ms. Tapanes Llahues said. “We’re still working with Miami-Dade County and the City of Miami. We believe we’ll be able to project a few feet, and that is our goal, but it’s still something that requires additional discussions, with specifically Miami-Dade County since it’s their right of way.”

The duPont Building is in the Flagler Specialty District, which city planner Elia Sorice said was created to spur more activity in the area outside of business hours. The district allows for a larger concentration of alcohol service establishments.

The duPont Building was completed in 1939 and placed on the National Register of Historic Places in 1989.

The city’s planning department recommended approval with conditions, including that the applicant would follow the design and mitigation measures based on an acoustical impact study.

Much of the board’s conversation centered on one of the planning department’s conditions:

“The Exception is limited to the applicant, D. Manatee Holdings, LLC, or owner, Alfred I. Dupont Bldg. Partner LLP. Any other entity must be approved by the Planning Department and may require a new Exception.”

Exception permits are required in the city when the zoning doesn’t allow for certain functions by right. To obtain an exception, the city requires a hearing with the Planning, Zoning and Appeals Board, and in some instances, such as with this business, city commission approval.

Ms. Tapanes Llahues said the city and the applicant negotiated to reach the condition, which allows the owner to take over the site or sell D. Manatee Holdings.

Board member Adam Gersten opposed the condition, saying, “it makes it impossible to sell something.” He urged the city attorney’s office to look into the legality of such conditions.

“Zoning rights shouldn’t be based on anything about the person, or the company or the operator,” Mr. Gersten said. “This is about what the underlying exception to change the actual zoning, what can be there or add to it can be. This isn’t a Certificate of Use hearing.”

Aaron Zeigler, the only one opposing it, said, “I can see it both ways. But at the end of the day, it’s an exception, or you can call it a privilege, so to speak, and the city should always be able to control that at some point.

The duPont Building isn’t the only downtown historic building that may house a brewery.

Last year, the city commission granted developer Stambul USA approval for a series of establishments in the Old Post Office building, another downtown building on the National Register of Historic Places. One of the building’s tenants will be Biscayne Bay Brewing. – Gabriel Poblete