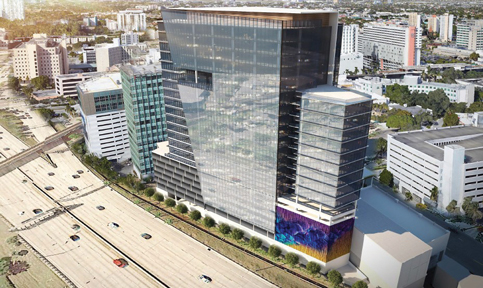 A plan to construct a state-of-the-art office tower in the city’s Health District has been recommended for approval by a city review board.

Phase I will update an existing three-story building on the site, built about five years ago. The tower is Phase II.

In a letter, Melissa Tapanes Llahues, an attorney representing the owner-developer, said the property is 2.14 acres. The western parcel was originally developed in 2015 with the existing three-story retail center.

The city approved development of 47,923 square feet of commercial space, including restaurants and retail, as well as outdoor dining.

According to Ms. Llahues, 82 parking spaces were proposed where 60 were required.

As part of Phase II, the applicant proposes “a state-of-the-art office tower on the south side of the property in the heart of the city’s health district.”

The developer is seeking a waiver to reduce the required parking by eight spaces, providing 524 spaces.

“The Health District is a pedestrian friendly area with a multitude of public transportation options coupled with the motorcycle and bicycle parking spaces provided, the proposed parking reduction is de minimis and will not have any impact to the area,” wrote Ms. Llahues.

The new building was designed by architectural firm CUBE 3, whose Jon Cardello explained design elements to the review board. He said there will be outdoor terraces for office users at different levels and have amenities for office uses. Different façades will use fins and angles, modulating vertically and horizontally, to get a shadow articulation on the new building, he said.

Board member Robert Behar asked what type of office uses would be in the new building. Mr. Cardello said the tower would be for medical and general office uses, and a little bit of daycare.

Some board members expressed concern with no designated drop-off and pick-up area for vehicles, including ride sharing services.

Board chair Willy Bermello said, “Can you look at the ground floor again? Is there any way or consideration to provide a drop-off, pick-up lane for Uber, Lyft, and so on … without lowering the number of parking spaces? That would have been a good compromise.”

Mr. Bermello said he agreed with Mr. Behar, “I worry about how people will get there (to the medical offices) … with any medical office placement the parking spills over.”

The developer is asking for waivers to allow fewer than the required number of parking spaces, and to allow some spaces to be smaller than typically required.

“You have less spaces, and smaller spaces,” said Mr. Bermello, “It’s going to be harder to park. To me it’s a concern. If you had a way people could be dropped off, I think that would help out.”

Maritza Haro Salgado, an attorney representing the developer, told the board that a drop-off and pick-up spot was explored but they were told traffic lanes must remain clear for ambulances because of the close proximity to Jackson hospital.

Ms. Salgado said the developer is willing to accept a recommendation from the board to work with city staff on an internal drop-off location for vehicles.

The board’s motion to recommend approval has one condition: to reevaluate having a drop-off, pick-up on the ground floor or the second level.