The developers are planning 38,000 sq. ft. of offices in a building that would face 5th Street as you enter Miami Beach from the MacArthur Causeway. The new structure would sit alongside an historic building that will be restored and moved to a more prominent position on the property while also acting as a buffer between the residential neighborhood and the new building.

The development team aims to create a light-filled space focused on the outdoors that might appeal to tech startups or small hedge funds and family offices, but first they will need a Code amendment allowing a height increase from 50 to 75 feet. The area already allows for hotels and residential developments to go to 75 feet, but office uses are limited to 50 feet in height. An increase would allow for the taller floor to ceiling heights desired by Class A office tenants.

Earlier this week, the City Commission’s Land Use and Sustainability Committee recommended the Commission send the proposed ordinance allowing a height increase to the Planning Board. Following a stop at the Planning Board, it would come back to the City Commission for consideration. The City Administration had recommended a height increase for office uses for properties fronting 5th Street from Washington Avenue to Lenox Avenue but the Land Use Committee endorsed a more limited version, allowing a maximum height of 75 feet for properties on the south side of 5th Street between Jefferson and Lenox to incentivize office uses. (The draft ordinance can be found here.)

“The Administration believes that the subject Ordinance is good policy and will be an incentive that will help to diversify the City’s economy,” City Manager Alina Hudak wrote in a memo to the City Commission accompanying the item. “The proposal is also consistent with the concept of transit-oriented development (TOD), which is ideal for the 5th Street commercial corridor.” 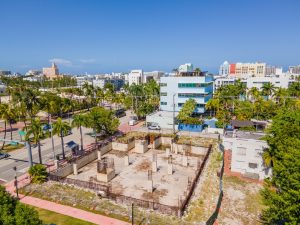 Attorney Matt Amster of Bercow Radell Fernandez Larkin & Tapanes told the Land Use Committee the “seasoned” development team is planning “a signature office building” and a “renovated and preserved two-story historic structure” that will be moved from the south side of the property, making it “more prominent on Michigan [and] allowing for a buffer for the neighborhood to allow our project to be further to the north, more on 5th Street so that the height is properly buffered.”

Pending the outcome of the Code amendment to allow the height for office uses, Amster said the team will apply “imminently” to the Planning Board and Historic Preservation Board and “could be breaking ground next summer.”

“[The developers] are seasoned veterans that have already looked at the market, seen the demand and see that this little pocket on this commercial corridor is ripe for this type of Class A office,” Amster told the Committee.

Khurana said he and Pallaoro met a few years ago. “What we share is a great love of architecture and design. I think we kind of view ourselves of as the custodians of the built environment… it’s not just putting buildings up.”

In looking at Miami Beach, Khurana said, “We really wanted to make sure that our project was very well thought out and treated in a thoughtful manner.” His firm’s philosophy is “about craftsmanship, about quality,” he said. “It’s not about big moves and anything that’s over the top. It’s about how things get built and how things get built correctly.”

Pallaoro added, “The vision of our two firms is very much aligned which is why we are such a powerful partnership.”

“We like to be at the forefront of the innovation in design and quality” he said about his firm. “We also have a great attention to sustainability.” Bizzi & Partners was one of the developers of 565 Broome Soho, New York City’s first zero-waste building.

“It sounds cliché but we really believe in our legacy,” Pallaoro said. “We want to be proud [of our buildings.]” Citing the firm’s Italian roots, he said, the firm’s culture is to “build buildings to last hundreds of years, maybe thousands of years.”

In developing projects, he said, the goal is to “do something good for all the stakeholders, for all the community” which makes the choice of an architect “very important because we always want to deliver something that fits very well.” He calls Campo Baeza “one of the masters of our time… a master of timeless architecture.”

Campo Baeza has created draft renderings of a modern concrete and glass building that are being used in initial conversations with stakeholders but are not yet ready to be released. The design includes a contemporary interpretation of breeze blocks, a lobby space with 35-ft plus ceiling heights, an open atrium, and private balconies.

Khurana said the design takes into account the needs of future tenants and how offices will be used in the age of COVID. “It’s about outdoor experiences, not just being stuck inside.” The private terraces, he said, are ten feet deep taking into account the size of a conference table “to give all our tenants the opportunity to create outdoor conference spaces.”

Continuing the focus on outdoor spaces, Khurana noted, “We’re creating this very impactful glass atrium… that rises to the rooftop. The experience in these offices is going to be all light” through a combination of tall ceiling heights and the surrounding glass, he said. In the atrium, the developers want to install “something that has a massive impact,” perhaps a singular olive tree versus many different plantings.

Pallaoro said the building is about the “quality of life and work” for those inside the building but as well as an “elevating” experience for people passing by.  “It blends in very, very peacefully and very elegantly into the gate of South of Fifth.”

Khurana, who indicated “We hope to be tenants in the building,” said the layout is flexible to allow for full floor tenants or to accommodate two to four tenants. “We didn’t just want to lock ourselves into one tenant type,” he said. “A Silicon Valley firm or startup… they may want less space to start and expand into a larger space later.”

Khurana added, “We put a lot of thought into how we could create this relationship between the historic building and our [new] building.” The decision to move and rotate the existing historic structure, he said, means passersby will no longer be looking at a side angle of the home, but see it from the front. “We’re going to very delicately restore that existing home… [and] tie it to the base of our entire building.”

The historic building will house a coffee or juice bar, a request of the neighbors who said the area was lacking a local spot.

“Amenitizing offices is very important” right now, Khurana said so the team is planning to include a small gym/spa experience within the building, “a space where people can come down, work out, shower up and go to the juice bar and restaurant.”

Pallaoro said in order for developments to be successful, you have to have the right use. This property, he said, “is one of the first sites you see when you enter Miami Beach from the MacArthur and that’s a great opportunity to build a new landmark, an iconic property.”

When he and Khurana drove by it last year, Pallaoro said, they thought it was “the perfect space for a new office because we knew that there was a lack of office space in the neighborhood and we couldn’t believe it was being developed as a hotel.”

Khurana said he’s watched the migration of clients from New York to Miami, some of whom are moving financial services or family offices here but, he emphasized, “We wanted to locate the office project in a place that didn’t just cater to let’s say the wealthy hedge fund manager… but also to employees.”

“I think that the access for potential employees, being on the MacArthur, it allows people to come and work in Miami Beach and that’s something very important to us and so this location was ideal from that perspective,” Khurana said.

Miami Beach has placed an emphasis on creating Class A office space as one way to diversify the City’s economy away from a dependence on tourism. A height increase to 75 feet (from the previous allowable 50 and 60 feet) for office uses was recently approved for the west side of Alton Road and Sunset Harbour. Earlier in the year, Commissioners approved a height increase from 40 to 75 feet for office uses on Terminal Island, allowing a Class A office project being developed by Related Group to move forward. Commissioners have been reluctant to increase height for office uses for the entire 5th Street corridor despite the Administration’s recommendation. Two members of the Land Use Committee, Sponsor Michael Góngora and co-sponsor Mark Samuelian, preferred the more narrow approach to the draft ordinance which is supported by the South of Fifth Neighborhood Association (SOFNA). The third member of the Committee, Commissioner Ricky Arriola, advocated for the broader area as recommended by staff. After a stop at the Planning Board, the legislation will come back to the full Commission for consideration.

Meanwhile, the City has an RFP in the market for proposals to develop Class A offices on three City-owned parking lots and the 17th Street garage. Commissioners will review those proposals later this year with voters having the ultimate say on any long-term leases for the sites.

The City has also created incentives targeting tech and financial services firms which in the past month have attracted three firms – GMF Capital, Melvin Capital, and BTIG.