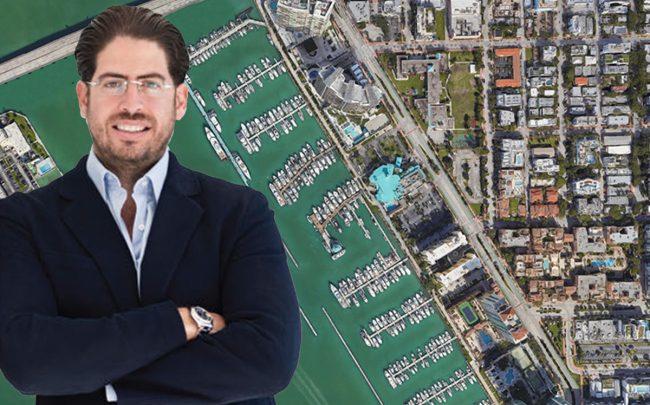 Terra’s David Martin hopes to develop a 23-story tower at the Miami Beach Marina in the city’s South of Fifth neighborhood.

Martin spoke before the city’s Finance and Economic Resiliency Committee on Friday, which met via video conference, kicking off a process that would require residents to eventually vote on ballot questions tied to extending and amending the city’s lease of the marina, selling air rights and possibly a request to increase the allowable floor area ratio.

“Without community support, this project will not move forward,” Martin said, adding that “if the community does not want this, neither do I.”

The developer has proposed paying $50 million for the air rights to redevelop the property at 300-344 Alton Road, a price that would be subject to two independent appraisals commissioned by the city. The existing building, which houses the restaurant Monty’s Sunset, would be demolished.

In its place, Martin would construct a building of up to 225 feet in height with 60 residential units, plus 45,000 square feet of commercial space, including retail and office. The site would also feature parking and two acres of open green space. The developer would also contribute $35 million to improvements to the marina facility that address resiliency and sea level rise, Martin said, spread out over 30 years.

The city entered into a lease in 1983 to operate and maintain the Miami Beach Marina and property until 2022. Now, Martin is proposing a 99-year lease with a minimum annual rent of $1 million, to be adjusted for inflation, plus an increase in the share of per-gallon gasoline and diesel fuel that is sold.

The developer is hoping to make it on the Nov. 23 ballot. To do that, the questions would have to be submitted to Miami-Dade County’s Supervisor of Elections by July 31.

The commercial building that’s currently on site was built between 1985 and 1994, property records show. Fort Partners had previously submitted an unsolicited offer to develop the property.

Martin has two other major projects in the pipeline that have required substantial involvement from the city of Miami Beach: the development of a convention center hotel with Jackie Soffer and partners, and the mixed-use project at 500 Alton Road, the latter of which he is building with Russell Galbut. – Katherine Kallergis