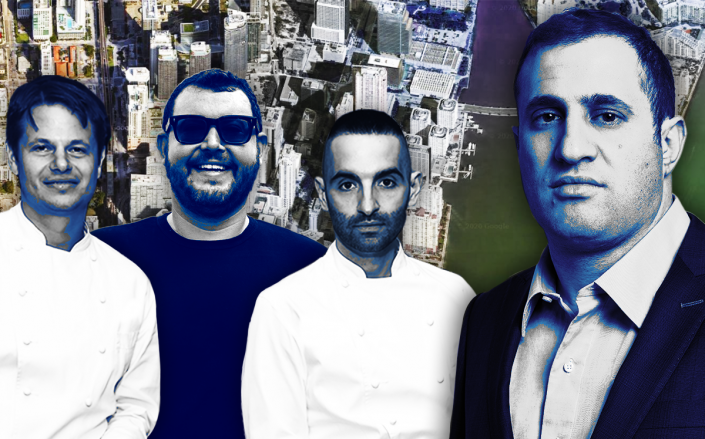 The 1 million-square-foot project will mark the first time Major Food Group expands into residential real estate. The company, led by founders Mario Carbone, Rich Torrisi and Zalaznick, has expanded rapidly in South Florida since opening Carbone in Miami Beach a year ago.

The tower is expected to include two to three restaurants, as well as bars, that Major Food Group will oversee, Zalaznick said. Condo sales are expected to launch next year.

Zalaznick called the project “a dream come true” and something Major Food Group “has wanted to do for a long time.” He and his partners plan to work on more residential projects in the future.

South Florida’s high-end residential market has been booming since the pandemic started, with new development condo sales benefiting this year from a surge in presales. Developers have rushed to launch new projects in recent months.

Studio Sofield and Ken Fulk are designing the project, according to a release. The 1,049-foot tall tower could become among the tallest in Miami, with others also planned at that height.

JDS is under contract to acquire the seven-story office building currently on the site, according to a source. Property records show Alphatur N.V. owns the half-acre lot. It is zoned for high density mixed-use development.

In addition to Carbone in South Beach, Major Food Group recently opened HaSalon nearby, and has the private ZZ’s Club in the Miami Design District. It also plans to open a Sadelle’s in the former Tigertail + Mary space in Coconut Grove, and other restaurants throughout South Florida. The company has more than 30 restaurants, hotels and clubs in the U.S. and abroad.

Stern’s South Florida projects include Monad Terrace in Miami Beach and Echo Brickell near the site of Major. Also in Brickell, Stern has approval for a 2.5 million-square-foot development with a 752-foot-tall tower with 1,000 apartments, 200 micro units, a 200-room hotel, and 250,000 square feet of office space. JDS inked a deal with the city of Miami, in which the firm agreed to build an $8 million fire station for the city on the ground floor and invest about $5 million in public benefits.

Published on December 01, 2021 on TheRealDeal.com