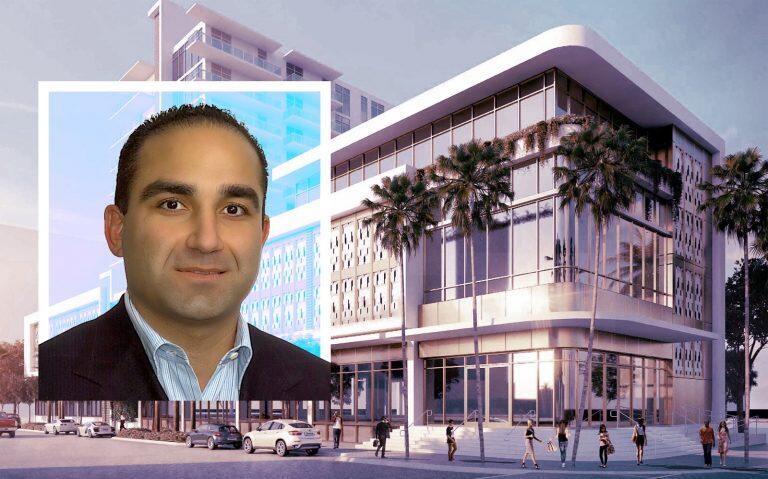 Developer Aria Mehrabi’s future 12-story mixed-use project will now include a pharmacy, in spite of a recommendation from Miami Beach’s planning department to reject the request, due to its proximity to another drugstore.

By a vote of 6 to 0, Miami Beach’s Zoning Board of Adjustments on Friday approved variances that will enable a CVS pharmacy to operate within a 30,000-square-foot Target store on the ground floor of Mehrabi’s tower at 6948 Abbott Avenue. The project will include 170 residential units, a parking garage, and a 3,634-square-foot roof deck.

Miami Beach’s planning department recommended against granting the variances due to a September 2017 city ordinance mandating that pharmacies and medical marijuana dispensaries must be 1,200 feet away from each other. It also treats pharmacies and medical marijuana dispensaries as the same. The proposed CVS is 798 feet away from a Navarro Discount Pharmacy. The ordinance also requires that pharmacies and dispensaries be limited to 7,500 square feet in size, limits them to four areas, and requires that they be separated from other business activities by a “one-hour fire wall.”

That city ordinance passed three months after the state legislature passed a law requiring that marijuana dispensaries be treated the same way as pharmacies. Altmed, a company that wants to open a marijuana dispensary at 607 5th Street in South Beach, is currently suing the city to overturn that ordinance.

Michael Larkin, an attorney representing Target Corporation, stated that CVS pharmacies are being included in all of Target’s new stores across the nation. “It’s a part of their business plan,” he said, adding that the size of the actual pharmacy within the store is just 702 square feet, and not 30,000 square feet as the city’s planning department claimed. At the same time, the pharmacy is integrated with the operations of the Target store and doesn’t need a fire wall, Larkin said.

Larkin told the board that the Navarro Discount Pharmacy at 631 71st Street effectively prevents any new pharmacies from opening within the North Beach Town Center-Central Core District without getting a variance, even though it’s one of the four districts where such facilities are permitted.

“The [Town Center] Code specifically provides for pharmacies as a permitted use in this area of the city, as well as encourages centralized mixed-use development over multiple independent retail uses,” Larkin wrote in an April 5 letter to Steven Williams, Miami Beach’s chief of planning services.

Larkin said Target and Mehrabi will offer a covenant assuring that the project will not include a marijuana dispensary. Additionally, Larkin pointed out, the CVS pharmacy within the Target will likely be the only permitted pharmacy within Town Center, thanks to the city’s distance requirements. The CVS will prevent any future marijuana dispensaries from being established in Town Center as well.

In November 2017, a majority of Miami Beach voters approved floor area ratio increases for future real estate development within a section of North Beach between Indian Creek Drive, Dickens Avenue, 72nd Street, Collins Avenue, and 69th Street, to encourage economic development in what the city referred to as “Town Center.” Those voter-mandated zoning changes were finally codified by the Miami Beach City Commission a year later.

Since then, a number of projects have been proposed within the Town Center project by Crescent Heights, Matis Cohen, and Robert Finvarb. Mehrabi is also proposing a separate 14-story mixed-use tower at 409 71st Street.