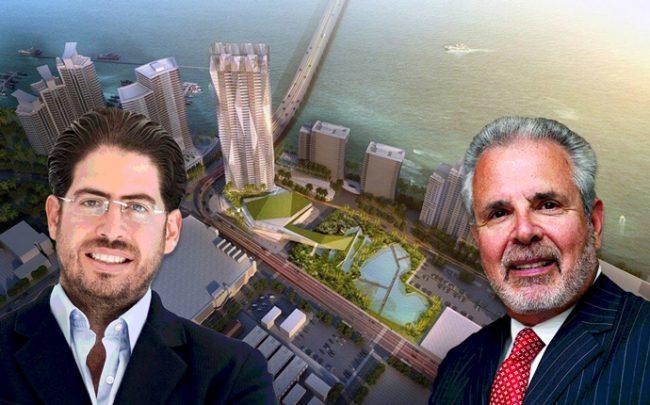 The city of Miami Beach has reached a truce with developers David Martin and Russell Galbut that allows the duo to move forward with their planned luxury condo project at 500 Alton Road.

After a contentious back-and-forth with Galbut over the city’s monetary demands, Miami Beach commissioners approved a settlement agreement that allows the developers to exclude stairwells, elevator shafts and mechanical chutes in calculating the floor-to-area ratio of the proposed 44-story tower, known as Park on Fifth.

At the same time, the elected officials voted in favor of a measure that would preclude Galbut and other builders on Miami Beach from seeking the same interpretation for other projects in the city.

In exchange for dropping a legal challenge of its own Board of Adjustment, the city is getting a reduction in the number of maximum units from 410 units to 330 units, and Park on Fifth’s developer will not change the height and floor massing of the new building.

Martin, president and co-founder of Terra, and Galbut, co-founder of Crescent Heights, also agreed to cover any cost overruns for the city’s planned $9.6 million pedestrian bridge over the MacArthur Causeway; bump up the completion date of a planned public park; and provide a letter of credit to ensure the project gets done. They also agreed that they would not seek the same FAR interpretation for other Miami Beach projects they are involved in.

“It’s time to realize this is a bargain of a lifetime,” Galbut told city commissioners. “There is no other way for you to accomplish these goals. You are getting the entire park almost immediately. The pressure on the developer is overwhelming.”

In addition, the developers agreed to pay $270,000 for the city’s legal fees connected to the related legal challenge of Miami Beach’s own Board of Adjustment’s ruling in favor of Martin and Galbut in November, plus another $200,000 for any future legal challenges brought by other zoning applicants.

When city commissioners pushed for money, Galbut threatened to end all further discussions when Mayor Dan Gelber asked him to continue negotiating with the city’s private lawyer Jeffrey Bass.

“There is no need for us to step outside and talk,” Galbut said. “Either we get it done today or we don’t get it done….We agreed to pay the $270,000 because David Martin begged me to, even though it went against my principles.”

Ultimately, Galbut and city commissioners agreed the developers would kick in $300,000 for its FAR legal defense fund in addition to the $270,000 to end the current litigation.

In December, the city sued the Board of Adjustment to overturn its decision that sided with the Park on Fifth development entity. The board’s interpretation of city code is that mechanical chutes, elevator shafts and stairwells are not part of floor-to-area calculations, which set off alarm bells at Miami Beach City Hall that new project developers would seek the same accomodation.

Park on Fifth is located on the former site of South Shore Hospital. The shell of the main medical building stood for more than a decade between 5th and 6th streets on Alton Road while Galbut submitted various redevelopment proposals to the city. It was demolished in April shortly after Galbut and Terra announced the companies were teaming up to build Park on Fifth.