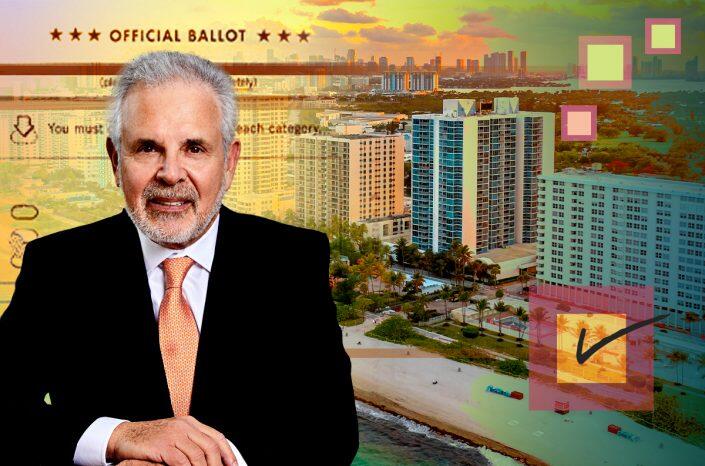 Miami Beach residents voted in favor of zoning changes that could boost floor area ratio — or overall project size — of certain properties in the city. They also approved closing a loophole tied to the city’s vacation of public streets.

Voters on Tuesday approved an increase in FAR to 2.6 from 2.0 for the Alton Road gateway area, which will allow Russell Galbut and David Martin of Terra to build a taller mixed-use project on the site of the Miami Beach Community Health Center at 710 Alton Road, in exchange for a new health facility and public library across the street at 633 Alton Road.

Galbut said that the new building at 710 Alton Road will be about 15 stories tall with about 120 residential units, some office space, parking and community-oriented retail fronting Canopy Park. He is working on the design plans for that project, and the developers will cover the costs and will build the new health center across the street.

Nearby, the developers are building Five Park, a condo tower next to Canopy Park at the entrance to Miami Beach at Fifth Street and Alton Road, on the former South Shore Hospital site. Galbut and Terra launched sales of the condos at Five Park last year, and Galbut said that the developers will likely convert plans for the remaining residential units to condos from apartments. The tower will likely have fewer than 300 units.

Residents also greenlit a FAR incentive for developers who want to convert existing apartment-hotel properties to residential in some areas of South Beach. In some zoning districts south of Fifth Street, property owners could receive a bonus FAR if they are converting sites zoned for apartment-hotel uses to residential: to 1.5 from 1.25 in the RPS1 District, and to 1.75 from 1.5 in the RPS2 District.

On Tuesday, residents also OK’d a referendum requiring developers to seek voter approval to combine FAR of adjacent properties when the city of Miami Beach vacates – or transfers control of – streets or alleys. That means voters would have to approve a density increase before the city vacates, or transfers, streets. A number of developers use street vacations to increase their development size or footprint, or transfer zoning among properties.

Prior to the new rule, in June, developer Michael Shvo received approval from the Miami Beach Planning Board for the partial vacation of Alton Court between Lincoln Road and 17th Street, which would give Shvo the ability to transfer FAR from West Avenue to Alton Road. He plans a Norman Foster-designed Class A office project on the site of the long-shuttered Epicure Gourmet Market & Café at 1656 Alton Road. The board voted 5 to 2 in favor of Shvo.

A development group led by Martin of Terra increased the overall land size where the Eighty Seven Park condo tower was eventually built at 8701 Collins Avenue in Miami Beach through a vacation of the alley separating the two properties that was outlined in an agreement with the city. The project was developed next to the Champlain Towers South condo building in Surfside that collapsed last year, and insurers for the Eighty Seven Park development team contributed to the over $1 billion settlement reached in the condo collapse case.

Published on August 24, 2022 on TheRealDeal.com