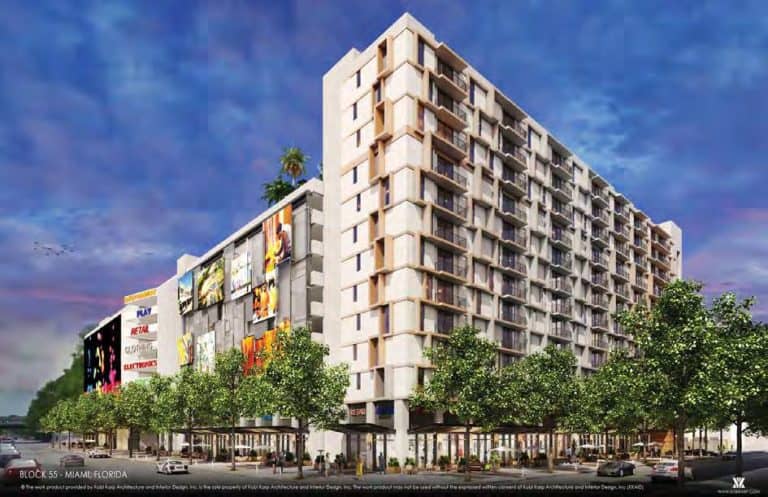 The Miami Urban Development Review Board approved a slate of mixed-use and multifamily projects that could add nearly 2,000 new apartments and more than 700,000 square feet of office and retail space between the Miami River in downtown Miami and North Miami Avenue in Wynwood.

One development, Block 55, initially faced derailment, however, when the first board vote ended in a tie. But it was later approved. A partnership between The Swerdlow Group and Terra is proposing the mixed-use project featuring 402 market-rate apartments, 154 affordable senior housing units and roughly 350,000 square feet of Class A retail space anchored by a Target. The Swerdlow Group won a request for proposals from the city’s Southeast Overtown/Park West Community Redevelopment Agency for the property at 249 Northwest Sixth Street.

Block 55 also calls for a public promenade along Northwest Seventh Street with retail, restaurants and a city of Miami NET office which drew criticism from board chairman Willy Bermello. He proposed the developer enhance the pedestrian experience of the promenade by creating grand entrances. Board member Jesus Permuy didn’t like the massing on the upper floors of the 240-foot-tall building. When the board voted on a motion for denial, it resulted in a tie.

An assistant city attorney informed board members that a tie vote meant Block 55’s application would have to be continued to the next meeting. Jeffrey Bercow, an attorney for Block 55, said any delay in approving the project would result in killing it. Bercow and another developer representative said a non-approval meant their client could not close the deal with the CRA.

“We have a required closing date in March,” Bercow said. “If we have to come back to the UDRB that means we don’t get final resolution until 30 days beyond our closing deadline.”

The board ended up rescinding its denial vote and approving Block 55 with conditions that incorporated Bermello’s suggestion and the developer agreed to break up the massing of the upper floors with an architectural element. – Francisco Alvarado