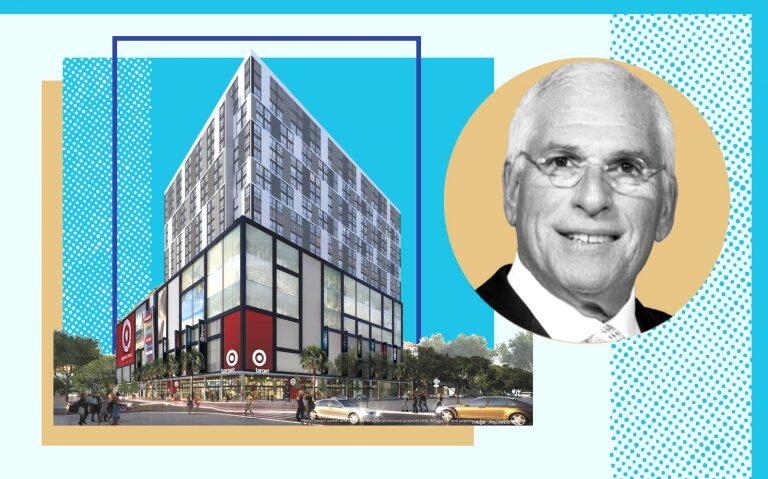 A Michael Swerdlow-led mixed-use project in Miami’s Overtown neighborhood is getting local government financial assistance for its affordable housing component.

Swerdlow told commissioners that Block 55, which will feature 578 apartments for low-income seniors on top of 250,000 square feet of retail space and a parking garage, is on track to break ground in the coming weeks.

Recently, Block 55 general contractor Coastal Construction filed for a permit to begin the foundation work on the 3.44-acre site at 249 Northwest Sixth Street in Miami. Swerdlow’s partners are SJM and Alben Duffie. The group purchased the land from the Southeast Overtown/Park West Community Redevelopment Agency for $10 million.

“We are starting construction immediately,” Swerdlow said. “We already have leases with Aldi, Target, Ross, Burlington and Five Below. If you think it was easy to bring Target to Overtown, you would be wrong. But they are coming.”

According to supporting documents provided to city commissioners, Target is leasing 49,306 square feet on the ground floor of Block 55, which is also alternatively known as Sawyer’s Landing. The big box retailer, which obtained a clause in its lease to prohibit any competitors with revenue above $5 billion from also taking space at Block 55, agreed to pay an annual base rent of $1.2 million for the first five years of a 10-year deal with six five-year renewal options.

Aldi, which also signed a 10-year lease, is taking 23,723 square feet of space on Block 55’s sixth level. The supermarket chain agreed to pay $693,897 annually for the first five years.

The project is moving forward despite losing Coconut Grove-based developer Terra as a partner, and despite a lawsuit filed by a competing builder last year. Entities tied to developer Don Peebles sued Swerdlow, his development company Downtown Retail Associates and Duffie in an attempt to derail the project.

Peebles’ Overtown Gateway Partners alleged that Swerdlow and Duffie sabotaged his proposal to build a mixed-use project on the Block 55 site by unduly influencing the Overtown CRA’s executive director Clarence Woods and then-city commissioner Keon Hardemon. Overtown Gateway Partners is seeking $175 million in damages, including $160 million in alleged lost profits and $15 million from the previously proposed deal between Swerdlow and the Peebles partnership that fell apart.

Miami-Dade Circuit Court Judge Michael Hanzman dismissed one of the counts in Overtown Gateway’s lawsuit, but the litigation is still pending. In a memo that was part of the city’s Block 55 agenda packet, Swerdlow asserted the lawsuit’s claims were “ridiculous.”

“Most importantly, the lawsuit poses no threat to the property,” the memo states. “We have already acquired the property and the title insurance has been issued with no mention of the lawsuit.”

Published on June 1, 2021 on TheRealDeal.com