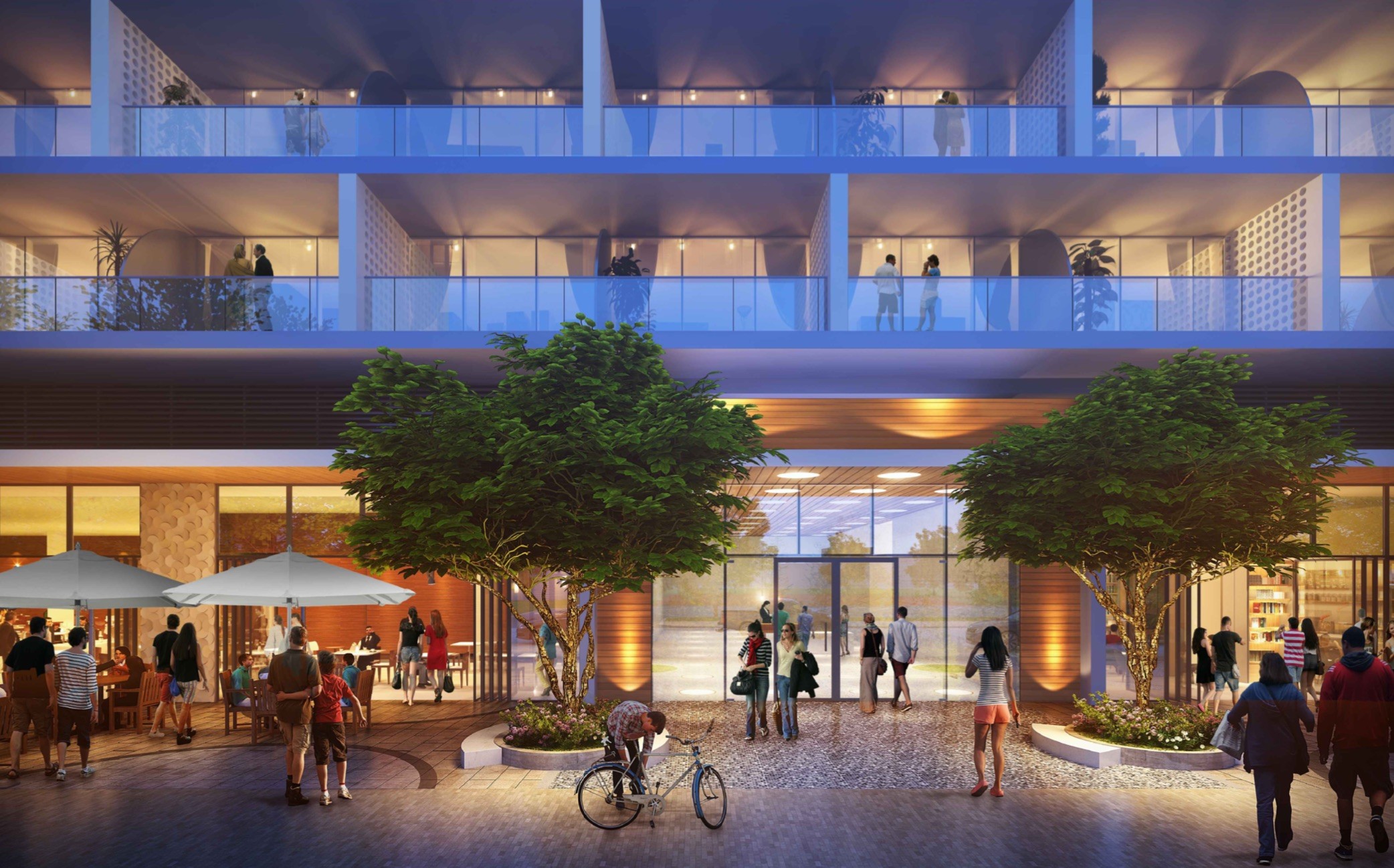 Plans have been submitted to the Miami Beach Design Review Board for a new mixed-use development overlooking the North Shore Park on 72nd Street. An entity controlled by Matis Cohen and the Galbut family is proposing to build a 22-story tower with ground floor commercial space, a landscaped amenities deck, and a rooftop terrace in the North Beach Town Center.

The project, designed by Arquitectonica, includes co-living units along with traditional studio, and 1, 2, and 3-bedroom floorplans. Co-living, which is taking hold in urban areas throughout the U.S., is new to Miami Beach. The concept allows for smaller living spaces and more shared amenity space, often appealing to younger and older audiences looking for smaller spaces at more affordable prices.

“This is a true mixed-use project that embodies all of the principles that the City’s staff and leadership were trying to accomplish” in creating the North Beach Town Center, Cohen told RE:MiamiBeach. “We have mixed-uses in types of living within this building and retail” along with a “very high percentage of amenity space that is more on the level of hotels than any apartment building in Miami Beach.”

There are 283 residential units proposed, 125 of them co-living spaces. For density purposes, the co-living units will count as half that number (62.5) if City Commissioners pass two ordinances to establish that as the calculation for co-living units. The ordinances are up for second reading at this Wednesday’s Commission meeting. The new calculation would bring the residential unit count to 221 units, “less than the maximum allowable density of 258 units,” according to the DRB application. All are proposed to be rental units. [Update: The Commission did pass the ordinances allowing for the calculation that supports Cohen’s density numbers.]

Unit sizes range from 450 square feet up to 1,400 square feet. “Our co-living units are about 450 square feet,” Cohen said. “The average studio apartment in North Beach, which is about 80 percent of the housing stock there, is about 400 square feet. In addition to that, with what we’re proposing, we’re trying to embrace Miami Beach living by providing a very rich outdoor experience attached to these micro-units of about 125 square feet” by including balconies. “So, the living experience won’t be 450 square feet it will be 575 square feet. What we’re trying to do is incorporate indoor-outdoor living, not only in the units themselves but in the very rich amenity deck which is approximately 30,000 square feet.” Overall, Cohen said “The building is approximately 25 percent micro units and the entire building is more than 30 percent amenity space.”

Cohen noted he hasn’t seen anyone locally including the outdoor space with co-living units. More importantly, he said, the diversity of the living spaces “creates an inclusive sense of space for a broad range of demographics and a broad range of socioeconomic levels who will meet in the restaurant downstairs or the local coffee shop or the park across the street which is accessible to everyone.” 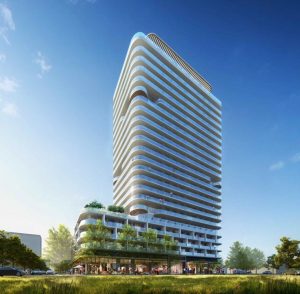 “Town Center as a compact boutique city, now has a product that can bring back full-time residents that have been forced to look for housing in downtown Miami, Edgewater, and Wynwood,” Cohen said, calling the proposed development “the perfect combination of urban and beach amenities.”

Attorney Ethan Wasserman wrote in the DRB application, “The tower is designed within a reduced building footprint that allows for substantial open space and landscaping on the fifth-floor pool deck directly below. All the residential units are designed with large glass windows and expansive open balconies creating an indoor/outdoor experience that perfectly complements the substantial green space located in the immediate proximity of the Project as well as the expansive City and ocean views, essentially, an urban lifestyle within a unique beach setting.” Living units will be incorporated from the 2nd to the 22nd floors. Parking is included within the first four floors and is screened from public view.

“It was really important to us and our architects to incorporate MiMo themes within the podium level,” Cohen said. “At 55 feet, it gives the podium that experience of the low-scale. In addition, we wanted to create as much open space on our entire block as possible above the 55-foot podium space so, in essence, approximately 20 percent of the land coverage of our total building is in the tower.” 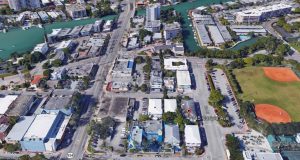 On the site now are a Post Office, surface parking lot, child care center, office and residential space, and two-story multifamily structures. For now, the Post Office which has a lease through 2021, will remain as is on 71st Street.

“The Post Office is very important to our community and we’re doing everything possible to accommodate the needs of the Post Office in our development plan,” Cohen said. “It is not easy to negotiate with the Federal government but we are, again, doing everything to try and keep them where they are within the new development and that is why we are developing this as two-phase project.”

In November 2017, voters approved an increase in density to allow for the development of the Town Center area to revitalize North Beach. Cohen was one of the principals in a compromise agreement with preservationists that led to voter approval. Since then, he has been a leader in working with the City on development standards for the area, often the lone wolf attending meetings on the topic.

The developers are seeking two waivers, one to allow for separate driveways for the loading and parking needs of the project and a second to allow the tower to go up to 220 feet. Wasserman wrote in the application that the City’s Land Development Regulations state “properties greater than 50,000 square feet and located North of 71st Street may exceed the maximum height of 200 feet, up to an additional 20 feet in height, ‘based upon the merit of the design’ of the Project.” The additional 20 feet, he noted, is for the top two floors which will contain “approximately 12 units per floor” allowing for a “diverse residential program” within the building.

“Additionally, the glass facades and integrated verticality of the building furthers the City’s goal of allowing increased building height for the development of aesthetically interesting buildings within the Town Center district,” the application states. “Lastly, the additional height will not impact additional structures on this block as this is the only tower located on this entire City block, creating open views for the neighborhood and reducing the overall massing footprint.”

The application includes a variance to increase the maximum building height, up to three feet, “to allow for a proper and commercially reasonable amenity platform at the 5th floor,” though Cohen said the developers are considering withdrawing the variance request.

The development is currently on the agenda for the September 3rd DRB meeting. – Susan Askew