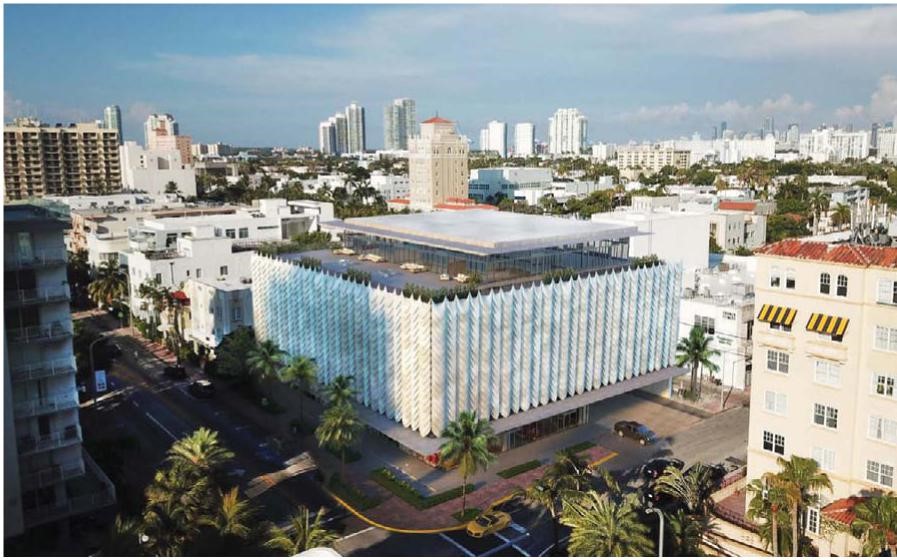 An unsolicited proposal to redevelop a parking lot at 13th Street and Collins Avenue into mixed-used office, retail and parking garage is one step closer to reality after a favorable recom­mendation from the Miami Beach finance committee, and now comes with two levels of office space and a possible contribution from the developer to the city.

Real estate developers Location Ventures proposed via unsolicited bid to transform the parking lot, at no cost to the city, into a $19.2 million office building with 169 parking spaces, with the condition that 60 parking spaces, rented at market rate, would be reserved for its office and residential tenants in its URBIN live-work project at 12th Street and Washington Avenue.

The original proposal included 8,500 square feet of offices and 8,100 of retail. After the city com­mission asked the developers to revise the economics, Location Venture presented a plan to the Finance and Resiliency Commit­tee on April 19 that would add a second floor of offices, reducing parking spaces to 131.

“Doing that would increase the revenue by about $1 million and reduce the revenue from the parking for about $100,000, per year,” said Leonard Roberts, vice president of development for Location Ventures.

The current parking at 1262 Collins Ave. is a 21,000-square-foot building with 60 parking spaces. The modified proposed project would trim to about 8,500 square feet but require a 75-foot height waiver to house about five floors of parking and two floors of office with a large terrace on the highest floor, all designed by Reinaldo Borges from Borges Architects.

The lease from the city would be for 99 years and be operated until the developers get their investment returned. The initial proposal stated that Location Ven­tures would run the garage until its equity was paid back within 10 years with a 10% internal rate of return. With a second floor of offices the payback period would be six years, and in the seventh year it would turn the garage over to the city, said Mr. Roberts.

Location Ventures also calcu­lated an amount it could contrib­ute to the city in replacement of the parking revenue lost during the time the company would hold onto the property until the internal rate of return is paid.

“If we were to do that same model with the two floors of office,” he said, “the payback period is less than 10 years, with that same $300,000 contribution,” since a floor of offices would grant a revenue of about $1 million per year.

Because it’s unsolicited bid­ding, the city must publish a notice for competitive bids in the Florida Administrative Register and a general circulation newspaper, soliciting bids from others for the same project. A window of 21 days to six months in which it accepts all from any kind of competitor for the property would be granted. Once the window closed, the city administration would decide which bid is in the public’s best interest and select that one.

For the project to advance swiftly, Location Ventures would need a competitive waiver, “a lightning speed RFP process, con­densed in a much shorter period of time,” (which would be 60 to 90 days) said Michael W. Larkin, from Bercow Radell Fernandez Larkin and Tapanes, the law firm representing the company.

The resolution is to be sent to the full commission, which will meet June 22, with a favor­able recommendation to move it forward.

“A lot of work still needs to go into this,” said Commissioner Mark Samuelian. “We need to re­ally beef up the economic returns for the city. But this is a step towards victory.”

Published on the June 9, 2022 Edition of Miami Today