The new owner of Miami Beach’s historic Paris Theater will present his plans for a high-end supper club to the City’s Historic Preservation Board this week. Mathieu Massa is seeking the Board’s approval to build kitchen and storage additions and to make interior modifications to support the new use.

Massa’s attorney, Greg Fontela with Bercow Radell Fernandez Larkin & Tapanes, wrote in the Historic Preservation Board (HPB) application, “The concept for this venue is for a restaurant and entertainment establishment, to recall the upscale supper club concepts of the mid-20th century.”

Fontela described a “1930s and 1940s inspired décor with the intent of transporting guests to a magical time” when “a night out on the town included enjoying five-star cuisine while the entertainment experience was alive around you.”

Massa plans “to retain the vast majority of the structure and all of its historic elements,” Fontela noted in the application. Proposed changes requiring approval include a new design for the lobby corridor and main theater area as well as a ground floor rear addition to accommodate an expanded kitchen and a small storage area on the roof.

In their report to the HPB, City Planning Staff noted they supported the ground floor and rooftop storage areas but expressed concerns about the changes to the approximately 100-ft lobby corridor that connects the Washington Avenue entrance to the original theater lobby. 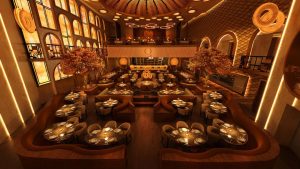 “The walls of this passageway contain 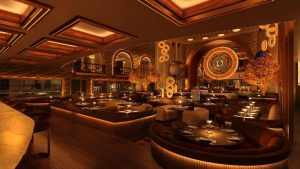 original features of the theater including movie poster boxes and decorative plaster details,” according to the report. “Within the corridor, the applicant is proposing to introduce a dramatic curving pathway defined by undulating walls clad with brass color vertical fins. These solid partition walls will completely obscure from view the poster boxes and decorative wall features. Since these are some of [the] only significant interior architectural features remaining, staff is not supportive of the complete concealment of these original theater elements. To this end, staff recommends that the solid back portion of the curving walls be eliminated. The remaining vertical fins could be attached to the floor and ceiling and would provide a semi-transparent screening element which would maintain some visibility to the original theater features.” Those recommendations appear to be incorporated into the presentation submitted.

“The original theater lobby contains a number of significant architectural features including celling moldings, decorative plaster detailing and original staircase handrails all of which are proposed to be retained,” the report states.

In the theater area, Beilinson Gomez Architects designed decorative arches along existing structural columns that will allow “the introduction of elevated theater seating to recall the glory of the majestic theaters of yesteryear,” Fontela said.

Noting the main theater space design and the proposed addition of “4 box type seating areas,” the Planning Staff report said, “Although dramatic, staff has no objection to [the] proposed design, mainly due to the fact that there are no remaining significant architectural features within the original theater volume.”

The Miami Design Preservation League (MDPL) Advocacy Committee is supportive of the plans with some concerns about the design of the front doors and the use of a separate VIP entrance. However, MDPL Executive Director Daniel Ciraldo said, “It’s nice to see this historic theater coming back to life.”

Massa reportedly paid $13 million to purchase the theater in July. The building at 550 Washington Avenue was constructed in 1945 and was designed by architect Henry Hohauser. Originally known as the Variety Theatre, it contained a 1,200 seat theater and 8 apartments. Over the years it has been a flea market, nightclub, and later a production studio. Most recently, it has been used as an entertainment venue, according to the City Planning Staff report.

Massa is the founder of Massa Investment Group and Mr. Hospitality which created and runs the operations of Bâoli, Marion, and El Tucán in Miami. – Susan Askew