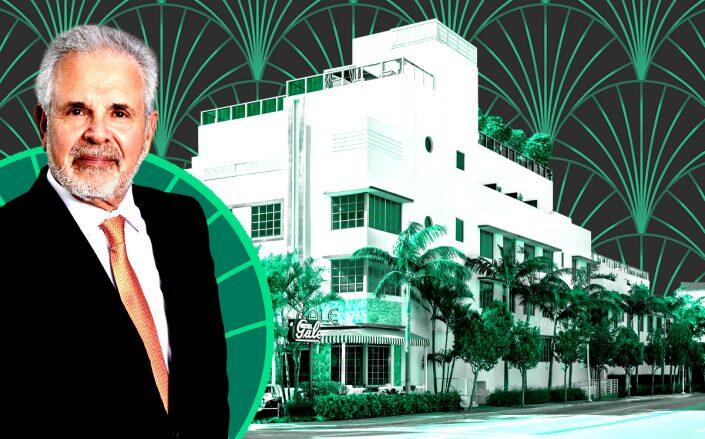 Russell Galbut’s Crescent Heights can move ahead with plans to build two additional floors at the Regent Hotel, one of two Art Deco buildings that make up the Gale Miami Beach.

The Miami Beach Preservation Board on Monday approved a Galbut affiliate’s request to demolish the rooftop pool and deck of the two-story Regent that is adjacent to the three-story Gale Hotel at 1690 Collins Avenue. The two new floors would house 12 new guest rooms and four meeting rooms, as Crescent Heights anticipates the Gale Miami Beach will benefit from spillover business from a nearby Marriott-branded convention center hotel currently under construction.

“We are seeking a modest expansion,” Michael Larkin, the Galbut entity’s attorney, told board members. “These changes will allow the hotel to better serve the convention center market, which is a stone’s throw away from this property.”

The preservation board unanimously approved the Regent Hotel renovation on the condition the developer work with city staff to explore replicating or restoring design elements that emphasize the building’s historic character.

Crescent Heights’ architect, Jennifer McConney-Gayoso, also tweaked the design to reduce some of the massing of the two new floors. The request came from Miami Beach Historic Preservation Officer Deborah Tackett, who recommended approval of the renovation.

Tackett had sought a postponement of the board’s vote so staff could work with Crescent Heights on enhancing the addition’s design to further match the Regent’s existing facade, as well as modifications to a new rooftop deck. However, a majority of the board agreed that Crescent Heights could make those changes as a condition of approval.

Menin Hospitality, a hotel development and management company led by Galbut’s relatives Jared Galbut and Keith Menin, operates The Gale Miami Beach. Completed in 1941, the Regent and the Gale buildings were designed by the late Miami Beach architect L. Murray Dixon. In 2012, Crescent Heights completed partial demolitions and extensive renovations to both Art Deco properties, which have a combined 87 rooms.

Galbut’s projects typically fare well in obtaining city approvals. In August, Miami beach residents voted to approve zoning changes that allow Galbut and his partner, Terra’s David Martin, to increase the floor area ratio for a mixed-use project at 710 Alton Road. The developers offered to build the city a new health center and public library at 633 Alton Road if the referendum was approved.