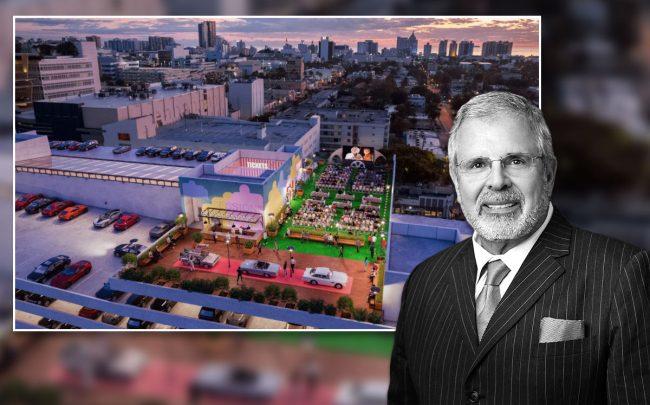 Miami Beach’s Land Use and Sustainability Committee on Wednesday moved to have the Miami Beach City Commission vote on a proposal next Wednesday that would allow rooftop movie theaters along Alton Road’s commercial corridor between 14th Street and the Collins Canal. The committee did not offer a recommendation.

The zoning rule, if approved, would allow outdoor movie venues with a capacity of 250 to operate from 5 p.m. to midnight on weekdays and 5 p.m. to 1 a.m. on weekends.

Gerry Cottle Jr., founder of the Rooftop Cinema Club, says his company is interested in making its Florida debut at 1212 Lincoln, on the 1600 block of Alton Road. The five-story mixed-use project is expected to include a citizenM hotel.

Rooftop Cinema already has three venues in London, three in California, one in New York and one in Houston. It’s premise is to show classic movies in an outdoor setting within an urban environment. Customers are given headphones and watch movies on a large screen. They are also served cocktails and food, Cottle told commissioners.

Cottle said the operation is adaptable to the social distancing required during the Covid-19 pandemic. “Thinking creatively, this is the kind of outdoor activity, with social distancing, that will be able to move forward,” he said.

However, the proposal met with opposition from residents. Eight West Avenue area activists called into the committee’s virtual meeting to oppose the item, saying they feared that the alcohol-serving venue will cause late night noise, light pollution, and could evolve into an outdoor party venue.

Commissioner Ricky Arriola endorsed the concept, adding that rejecting it could send a negative message to any businesses and developers wishing to invest in Miami Beach.

“I don’t think we want to send a signal to the business community that they will have a [tough time] if a few people object,” Arriola said. “This is something that benefits the entire city. We’re in great jeopardy of losing Regal Cinema [on Lincoln Road]. A lot of movie chains filed for bankruptcy. This might be the only place to see a movie.”

Nearby residents also complained that too many variances were already granted to Crescent Heights’ 1212 Lincoln project.

“The building has already encroached on us. We already have…. issues with lights at [1212 Lincoln’s] garage. The air conditioning faces the residential area,” said Mark Lacerda, a resident of the 1615 West Avenue condo building. “We are already suffering…. We don’t want any additional variances being added.”

Indeed, the mixed-use hotel, retail, and parking garage building is already allowed to have “entertainment venues” on the ground floor and alcohol-serving restaurants on the rooftop.

Galbut’s daughter, Marisa Galbut, said she’s more than willing to “work with city staff” to create a better ordinance, but insisted that stopping this project will harm the local business community. “The community is already hurt and will be hurt even more [if this is rejected],” Galbut said, stressing that the proposed ordinance still has to be heard by the Miami Beach Planning Board.

Commissioner Mark Samuelian said the item “still has a long way to go before being a final ordinance.” And Commissioner Michael Gongora agreed. “What is [being proposed] right now will not have my vote,” he said.  – Erik Bojnansky