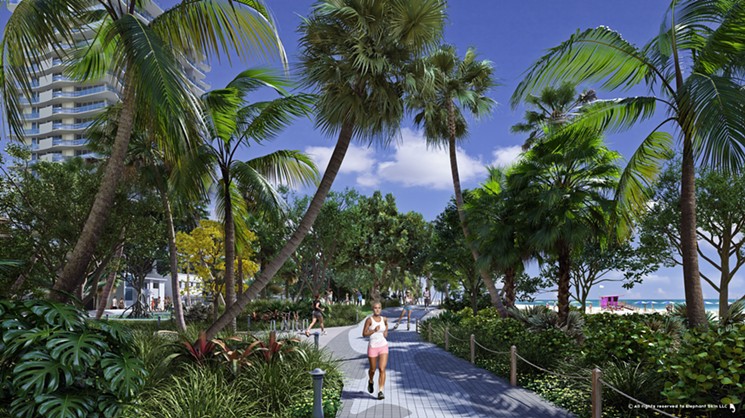 Despite a 2015 public vote against increasing density in North Beach, Miami Beach will allow a luxury condo tower and refurbished hotels on North Beach’s Ocean Terrace in exchange for a $15 million public park.

Commissioners last week unanimously voted to change the future land-use designation and zoning regulations of a two-block stretch between 73rd and 75th Streets on Ocean Terrace. The move will allow Alex Blavatnik — brother of the energy billionaire Len Blavatnik — and megadeveloper Sandor Scher to increase the scale of their North Beach construction project. In addition to erecting a new luxury condominium tower, the developers will renovate two oceanfront hotels and add as many as 110 new guest rooms. The project, spearheaded by the company Ocean Terrace Holdings, will also include 18,000 square feet of new retail space.

In exchange, Blavatnik and Scher have agreed to build a nearby parking lot and convert the current parking lot along Ocean Terrace into a multimillion-dollar public park designed by Raymond Jungles, the landscape architect behind Miami Beach Botanical Garden. The result will transform the area into something reminiscent of South Pointe Park in South Beach, developers say.

Dozens of North Beach citizens stood up to speak at the commission meeting. Those in favor of the project wore “Vote Yes” buttons and spoke about how a redeveloped Ocean Terrace would be the catalyst that revitalized all of North Beach.

They praised plans for the new city park with the motto “Vote yes for paradise and no to asphalt” and criticized the length of time they’ve waited for a project to take North Beach back to its long-ago heyday. Homeowners said they believed their property value would increase with improvements to Ocean Terrace. 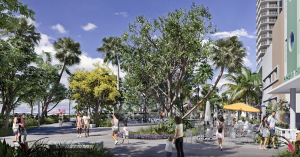 But increased property value also means increased rental prices for residents not fortunate enough to own their homes. Those against the construction project voiced concerns that the development would change North Beach, but not for the better.

“I’ve lived in North Beach my entire life,” Marsha Gilbert said during the public hearing. “My library card was issued there. I vote there. I walk on the beach almost every day there. I shop at the markets. I get my nails done. I use the tailor and Mr. Gibbs Shoe Repair. I’m tired of giving in all over Miami Beach to developers’ greed who only want more and more.”

Although most voiced their excitement about a new city park, residents also expressed concern about the overall plan. They voted against a North Beach development project in 2015 that would have brought luxury condos to Ocean Terrace built by the same megadeveloper, Scher. Mayor Dan Gelber said this development was completely legal. He cited City Attorney Raul Aguila’s June memorandum that said no voter referendum was required to change the city code.

Resident Ted Burman said he was “all for the project” but asked commissioners not to remove the parking area. He was backed by others. “This plan does not include parking for our senior citizens and sick families,” Paula King said. “You’re alienating an entire group of people that can’t walk to the beach.”

As he cast his vote in favor of the development, Commissioner Mark Samuelian said the neighborhood would mitigate the loss of parking through “a creative valet service” — now commonplace in South Beach. Valet parking will be the interim solution in North Beach, but there will likely eventually be new parking garages. The Ocean Terrace development team has expressed interest in building more overflow parking if additional legislation can be bypassed.

“Change is not easy,” Mayor Gelber said as he cast his vote in favor of the development project. “I have faith and hope that this is going to be something special for a place that deserves something special.” – Jess Nelson