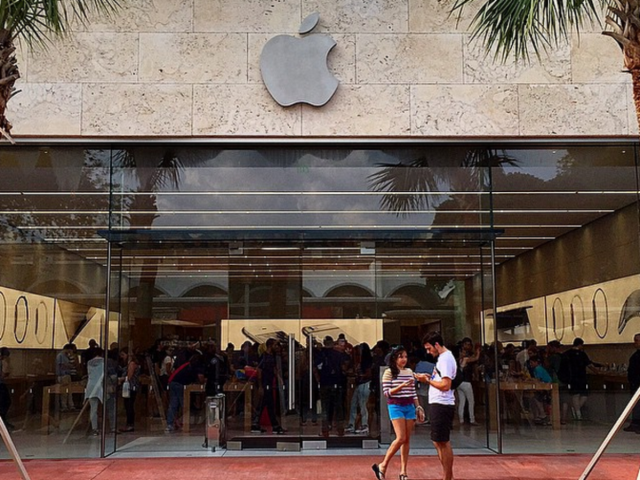 Excited Apple fans cheered out loud when the doors finally opened to the new store, located just blocks away from its old location. The line to enter the store Saturday morning stretched down Lincoln Road.

Customers who came out all agreed they liked this one better. “It’s incredible. I love it,” said Apple fan Lenise Poldor. “It’s bigger than the other one, so I like it.”

Fellow admirer Krystal Capp also told 7News that when it comes to Apple stores, size does, indeed, matter. “Brand-new store, great opening,” she said. “I like the walls, the openings, friendly. I like it better than the other store. It’s much bigger.”

The store, which is three times bigger than its prior location, collaborated with the world-renowned contemporary artist HENSE, who painted a vibrant mural for the new location. His work is inspired by the creativity and energy of Miami.

Customers gave the mural thumbs up. “I thought it was really cool, like, how the design kind of represents Miami,” said Robert Barroso, “how it’s stone-ish, how most buildings are like that, and how it’s also modern as well. I thought it’s a pretty nice design, pretty sleek, pretty clean.”

“The back part is really ingenious,” said Mike Forte. “You almost didn’t realize that it’s a whole different section, so … the building ends on the other street there. You can go in through the back door or from the front door, so that was a surprise to me.”

Customers also got a chance to check out the latest Apple products, including the iPhone 6, iPhone 6 Plus, the new MacBook and the brand-new Apple Watch, which was a big hit. “The watch is connected with the iPhone, so instead of answering the phone with the phone, you can answer on your watch,” said Poldor.

The first 1,500 customers got to take home a free commemorative T-shirt, which they were eager to show off. The T-shirts were also inspired by the artist HENSE, in keeping with the theme of the new Apple store.

Training sessions and free workshops were also available for those wanting to know more about the latest Apple products.