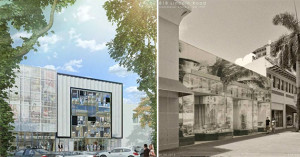 The rather glum-looking storefront of artist Romero Britto, which has graced Lincoln Road for years, is getting a facelift in reverse to look a lot like the facade it had back in 1935.

The original design by Miami architect Russell Pancoast consisting of shiny black stonework to replicate Vitrolite — colored glass that went out of production a long time ago, chrome details and irradiated glass display windows — will all be replicated by STA Architecture Group, Curbed Miami reported.

A new three-level retail structure, as well as being set back from Lincoln Road to preserve its historic character differentiate it from the original design. The renderers added a Britto image in the store’s window, but it is unsure whether the artist will remain the tenant. [Curbed] — Kristina Puga