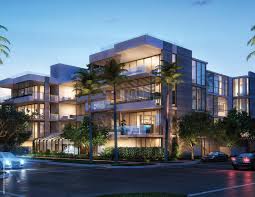 Mast Capital, the real estate investment firm developing the project, hired architect Rene Gonzalez to design the project, located in an area known for its Art Deco and Mid-Century architecture.

“I wanted to develop a luxury residential building that is elegant, warm, and forward thinking,” Camilo Miguel Jr., CEO of Mast Capital, said in a statement. “Louver House presents a design without compromise that reflects the vibrancy and charm of Miami’s exclusive South of Fifth neighborhood.”

Units will range from 2,088 square feet to 2,432 square feet with prices ranging from $1.9 million to $3.6 million. One Sotheby’s is marketing and selling the boutique condos.

In October, Mast Capital bought nearly two acres at 4000 Alton Road, the current site of Talmudic University. The company also purchased a Coconut Grove office building for $29.5 million in April and a Key West multi­family community for $39.5 million in June.

Other developments South of Fifith include Aria Development Group’s 321 Ocean, Terra Group’s Glass at One Ocean Drive, and the Continuum Miami Beach, where units on the market range from just less than $1 million to nearly $28 million. — Katherine Kallergis