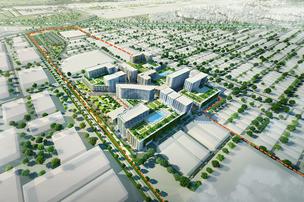 A large community of homes mixed with commercial uses could sprout up around a Tri-Rail station in Hialeah as part of a rezoning proposed by the city.

The Hialeah Market Station at 1200 Southeast 11th Ave. is one stop north of the Miami Airport Station, which links with Metrorail into the urban core of Miami. The Tri-Rail extends north through Broward and Palm Beach counties.

The area near where U.S. 27 meets State Road 112 is heavily industrial, but the largest property owner is pushing for redevelopment. Melissa Tapanes Llahues, an attorney with Bercow Radell & Fernandez who represents local landowner Gerard Keating, said her firm and Zyscovich Architects consulted with the city on drafting a comprehensive plan amendment and public private partnership for the 80 acres near the station.

In exchange for landowners giving the city land for new streets and public parks, the owners would receive density bonuses. They could build up to 15 stories and 125 units per acre near the station or up to six stories and 36 units per acre a bit further from the core of the new district. Their client Keating owns 20 acres there, including a former Winn-Dixie distribution center.

Another part of the plan is the formation of a community redevelopment agency, which would utilize the taxes from the new developments and property value increases to fund the new roads, parks and other public infrastructure, Llahues said.

“It’s a very convenient location and that’s why we have been working on this for a while, because of the access to all the transportation linkages,” said Zyscovich Architects Partner and Director of Design Suria Yaffar. “Mr. Keating wanted to utilize his site as a way to create the zoning, the vision for creating a real neighborhood.”

Yaffar said the design is similar to Midtown Miami, another neighborhood that Zyscovich Architects has worked in. It would allow retail and restaurant space on ground floors and residential above them. Office space and showrooms would also be allowed. The new roads would make individual parcels more accessible, she added.

The plan includes a linear park along the Tri-Rail tracks that would connect the neighborhood with surrounding communities, she said. Yaffar said it would be named Orange Blossom Parkway after of the train in the 1920s that connected Miami to New York and stopped at this site.

“We are trying to capitalize on this connectivity to create this new vibrant neighborhood,” Yaffar said. “This is a great opportunity for Miami to look at land near transportation as a valuable opportunity for redevelopment.”

Llahues stressed that the comprehensive plan changes don’t strip landowners of their current rights, which are mostly for industrial uses.

“It is our hope that the project is exciting enough to encourage redevelopment,” Llahues said.

The city council will consider the comprehensive plan amendment on May 12. If it is approved, site-specific applications would be required for individual parcels to be developed.

Published in the South Florida Business Journal, May 4, 2015